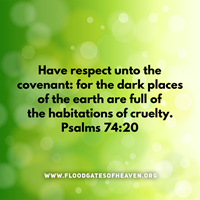 Today’s Reflection:  Psalm 74:20   Have respect unto the covenant: for the dark places of the earth are full of the habitations of cruelty.

In this passage, David is praying to God about the spiritual state of his beloved nation.  The sanctuary, once magnificent and glorious, lay waste, as the enemies came in and destroyed what once was held as a national treasure.  David heard and saw first hand the devastating effects that sin had brought into his homeland, and how it gave way to the power of the enemy to destroy what at one point was the epicenter of Jewish culture and life.

There is even now a striking parallel between what David was concerned about, and what we as Americans are concerned about today.  A nation once built upon Judeo-Christian values, has essentially seen the “burning down” of what once was the epicenter of American culture and life; namely, the church.  What houses of worship have not been literally burned down, in many cases, have been burned down in practice and principle.

Will we like David see what a great loss this is to our nation, and ask God to remember His covenant that He has made with His people?  David is asking God to ACT against the enemies who have blasphemed His name and profaned His holy temple.  Furthermore, he points out in our text that the dark places of the earth are full of the habitations of cruelty.

In short, he is saying to God that unless HE moves, the darkness will continue to prevail over the light.  And yet, David’s only hope (and ours too) is that God will “have respect” (or look to and consider) unto His covenant (aka His Word).  David says to God in verse 22, “Arise, O God, plead thine own cause…”

Dear friends, let us declare God’s promises of answering our prayers, and then hold Him to His word.  If not for our sake, for His own He will move to do mighty things among us, because He cannot lie!

And he said unto them, Go ye into all the world, and preach the gospel to every creature.

But we will give ourselves continually to prayer, and to the ministry of the word.

And they that shall be of thee shall build the old waste places: thou shalt raise up the foundations of many generations; and thou shalt be called, The repairer of the breach, The restorer of paths to dwell in.